There's a new chocolate bar on the block! Galaxy have added Toffee & Popcorn to its Duet line. You won't find many Galaxy chocolate reviews on my blog, I was, until recent years, a Cadbury girl but Cadbury are sadly pants now and I'm a sucker for new and 'strange' flavours.

The bar itself looked the same, same shape as the other Duet bars and the same distinctive sheen of Galaxy chocolate. Things didn't start off well as it smelt sickeningly sweet - even by my standards - paired with a not too pleasant toffee scent. 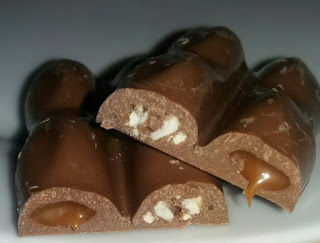 The toffee is actually a toffee flavoured caramel filling, so no lovely chewiness but that thick gooey caramel isn't a bad consolation! The bars are on the narrow side anyway, sectioned in to two separate fingers make things even smaller but they'd managed to pack a fair amount of each in.
As with the previous two bars I tried each finger individually before eating it how it's intended.

The 'toffee' side which smelt a lot like toffee but looked a lot like caramel thankfully was bang in the middle of both. A lovely toffee flavour that was nowhere near as sickeningly sweet as it smelt with the thick luxury feel of a caramel. Pleasingly the toffee is still strong enough to distinguish from caramel though - it doesn't taste like the other Galaxy caramel flavours at least!

The popcorn side wasn't quite as good. I enjoyed the crunchy texture as I knew I would but there was nothing really 'popcorn' about it - it could well have been crisped rice or bland nuts for all I could tell, I didn't notice any popcorn flavour at the time anyway. Some pieces did have a softer chewier bite like proper popcorn but the majority were crunchy.

I wish I could say that both flavours eaten together improved, any slight popcorn flavour that might have been there was overwhelmed by the strong toffee until half way through I realised I wasn't getting much popcorn at all... 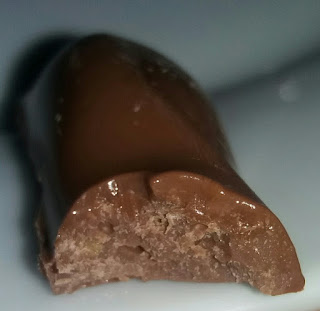 ... Thanks for that Galaxy! It did return eventually but to tell you the truth the gooey sticky caramel and the thick smooth chocolate really diluted what crunch there was.
Apparently there are toffee pieces included somewhere in the bar, which side I couldn't tell you! I didn't notice any toffee flavour in the popcorn side and there were no harder pieces inside the caramel so who knows where mine got to, maybe it was hiding wherever my section of popcorn went!

Rating:
It's O.K. The toffee flavour was nice but I think the popcorn side would benefit from being in a larger bar to squeeze in some bigger pieces. I said I didn't taste the popcorn alone and that didn't change throughout but I am left with a slight saltiness in my mouth afterwards, a bit more of that and they could well be on to a winner!
7/10