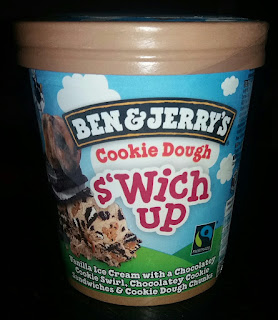 I know I claim to have a lot of favourite foods, but when it comes down to it I have two great loves: Ice Cream and Pizza. In fact the whole reason this blog even exists is because of a very successful mission to eat my way through every flavour of Ben & Jerry's.
I'm not exaggerating when I say we eat pizza three times a week and we always get Pizza Hut on a Sunday. I'm loyal to Pizza Hut, there is an authentic Italian pizza place near me but they don't deliver and due to a large Italian community it's impossible to inside the place to get a take-away or a table. The last time we went we counted 30 people queueing outside just to get in the door! Domino's we usually avoid like the plague, its too expensive and the pizzas are too small so I usually throw the untold amounts of leaflets we get straight in the bin. This week a strange photo of a tub of Ben & Jerry's caught my eye! 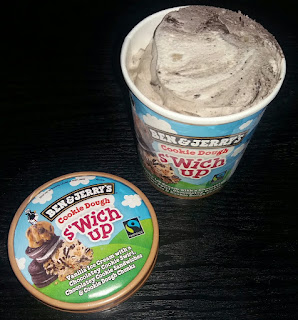 Cookie Dough S'Wich Up is a Domino's exclusive, limited edition flavour. It's only being sold until February so if you're after one you'd better make it quick, however the ingredients are in a few different European languages and it doesn't say anywhere exclusively made for Domino's. I'm waiting for a reply from Ben & Jerry's but hopefully its having a limited run in Domino's then being rolled out across the country. 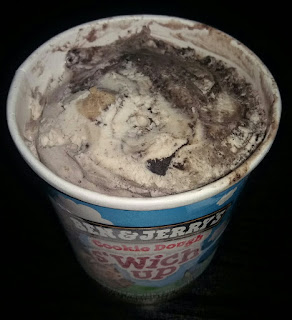 Look:
It looks a lot like Clever Cookies due to darker biscuits being used, the usual cookie dough chunks are still included in abundance and the light brown, creamy dough pops out against the grey mix of black biscuit and vanilla ice cream. 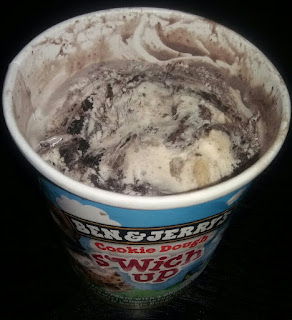 Smell:
It smells like Bourbon biscuits. And that's me sold. Bourbons smash Oreos, I don't care. An Oreo is fine when I'm in the mood, but for a chocolate cream biscuit it's all about the Bourbon. Why are we all so hung up on Oreos anyway, they're just a branded Romany/Gypsy Cream with a less racist name.. 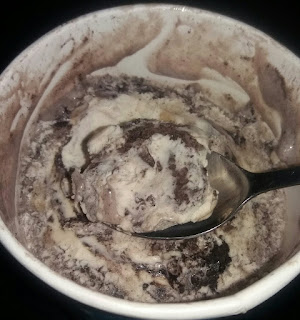 Taste:
There are 4 individual parts to this flavour, the first is one of the least used, most under-appreciated and actually faintest tasting in this particular pint - vanilla ice cream. There isn't too much I can say that I've not said in every other B&J review, its thick and creamy with a delicious flavour that would still be as delicious without any additional extras in the pint. I'm mainly going by previous experience though as it was totally overwhelmed by everything else. Vanilla was the perfect choice for Cookie Dough S'wich Up as a stronger flavoured base would be pointless.
In the standard Cookie Dough flavour its all about the chunks of actual cookie dough, in S'wich Up they're lagging at the bottom of the ingredients list - this pint only includes 3%. They are exactly the same as the original; a delicious cookie flavour with a wonderful gritty and perfect doughy texture.
A chocolatey cookie swirl takes up another 5% and this is where the Bourbon Biscuit scent came from. It's nothing like the core in the What-A-Lotta-Chocolate Cookie Core, that was more of a chocolate core with bits of cookie included whereas this is pure chocolate biscuit ground up and swirled throughout the ice cream. It's gritty and crunchy and tastes like actual chocolate biscuit not chocolate with little bits of biscuit included. 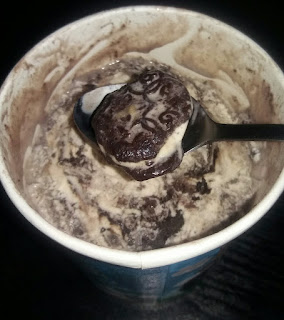 Last but definitely not least, are the chocolatey sandwich cookies. I know Ben & Jerry's have a very well earned reputation for not scrimping on the ingredients but this is ridiculous, I had four or five full sized Oreo style biscuits! I don't think they're actual Oreo as I'm sure it'd be printed all over the tubs and stamped on the biscuit itself but the taste was pretty much the same. I don't know how they manage it but the consistency stayed spot on, I'd expect a biscuit from a packet to go soggy if I left it to sit in some rapidly melting ice cream but it retained a perfectly crunchy bite and I could even distinguish between the firm biscuits, soft ice cream and creamy 'sandwich cookie' filling.

This is a biscuit lovers dream. The mixture of 3 different types of biscuit or cookie seems like it should be too much but I couldn't get enough, all three have delicious individual flavours and contrasting textures. I'd buy ice cream flavoured with any of the three alone but one with all Bourbon biscuits, cookie dough and Oreos together? I'm in heaven!!
This was the last one in my local Domino's so I'm off to find another store!
9/10