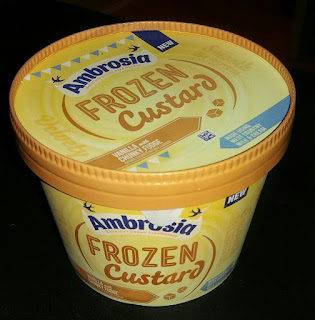 Lady Luck is firmly on my side recently! Not only did I finally find the Covent Garden Mulitgrain Risotto I've been after completely by accident, but on Saturday the lovely Nibs tweeted that Ambrosia were releasing a frozen custard, initially in Morrisons and on Ocado. My interest was certainly piqued but my Morrisons may as well be Hell on Earth and I wasn't planning on an Ocado order any time soon. I was rummaging the freezer in Sainsbury's for the Ben & Jerry's Cookie Dough 'Wich when what should I find but the frozen custards! Funny how things work out..

I got to Googling, as from what I remember the recipe for ice cream is basically a custard but it seems there are a few differences. According to U.S FDA Guidelines (I'm assuming a similar sort of standard goes for the U.K), for a frozen dessert to be considered a frozen custard it has to have a higher (1.4%) percentage of egg yolk solids - a smaller percentage means it's ice cream. Wikipedia informs me "true" frozen custard is a lot denser than ice cream, up to 100% overrun - half of the finished product can be air in soft serve ice cream but in frozen custard it is around 15-30%, similar to gelato.

I couldn't really care about the minor specifics as long as it tastes good and I love me some Ambrosia custard!
Things had started well even buying the things - 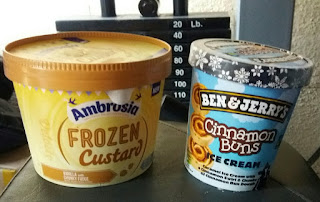 - look at the size of these bad boys! 850ml compared to a standard 500ml Ben & Jerry's and quite a bit cheaper at £3.25. Though if you're still paying full price for B&J more fool you, seeing as they're always on offer somewhere!

I got carried away and bought myself both flavours, Vanilla and Vanilla with Chunky Fudge but I decided to kick things off with the latter. 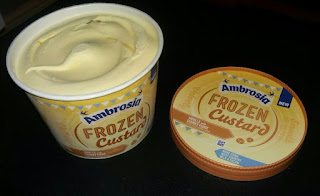 So, after all that its not even technically a pure frozen custard and it shows in the consistency. It couldn't have been any softer straight from the freezer without being a melted mess! It was a lot closer to soft scoop ice cream than any other big brand ice cream being sold in the supermarkets with the exception of Walls Big Bite - if you've tried that, this is how soft it is, although to be fair it does have a much thicker and fuller mouth feel. 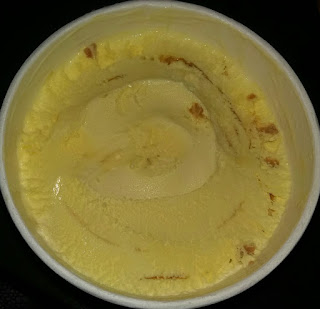 The flavour is vanilla, still I expected some kind of similarity to custard but the yellow was about as far as that went. There was no distinctive custard taste and not too much vanilla if I'm honest. There tend to be two types of vanilla: proper, delicious vanilla bean style flavour and the vanilla which is more of a plain base flavour, which sadly this is. It's OK but a bit boring.
Confession time, the tubs are huge but I was hungry. I ate the lot, good job really as the top section only had the fudge chunks you can see and a tiny sauce swirl. The fudge pieces were interesting, some were soft and more caramel-y in nature and seemed to melt away and some were a lot firmer and stickier with a chewy fudge like texture. I wouldn't have been happy if I'd bought a bag of fudge and they tasted like these, quite bland and sticking along the plain and boring theme but the texture at least gave me some satisfaction.
And this is where my greediness comes into play. 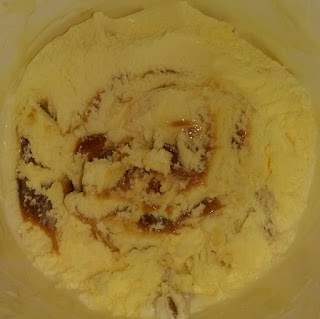 The bottom two thirds had a lot less fudge chunks but a whole lot more sauce and thankfully, its delicious. The flavour alternates between fudge and caramel though I find them to be quite similar anyway, and it's lovely and strong. It's sweet and rich yet was perfectly manageable amongst the duller vanilla and fudge chunks.
It wasn't just mine, Mr.1T had exactly the same problem with his (yes, we're both pigs but we're doing you a favour) in that all the sauce was mainly in the middle and bottom of the tub. 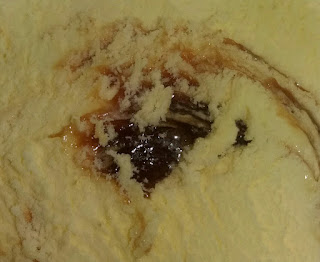 The sauce has a thick gooey consistency and the texture of that combined with the creamy soft custard/ice cream hybrid and the chewy sticky fudge was a winner. It's an easy eat, lighter than a heavier ice cream and reasonably priced but there are a few issues with the distribution of the fudge and sauce (not quite as bad as the Cadbury ice cream mind you) but if you want my advice, find some way to eat from the bottom up!

Rating:
A disappointing start, I'd have liked a lot more sauce and a better base flavour.
6/10