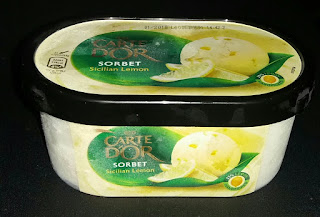 Last week I reviewed the delicious Sweet Strawberry Sorbet from Carte D'or. I also grabbed the Sicilian Lemon Sorbet at the time and I was quite looking forward to it, figuring the quality previously meant surely this had to be as good.

Normally this is the bit where I put a description of whatever I'm reviewing, but I no longer have the tub - for reasons I'll explain! 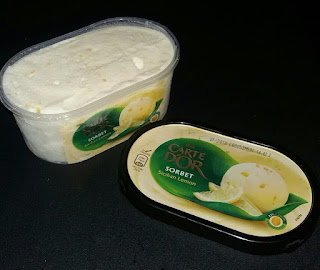 It's not as yellow as other lemon sorbets, more of a pale lemonade colour with bright yellow patches dotted about. The Sweet Strawberry had large real strawberry pieces and I didn't think they'd do the same with lemon - I mean I don't know too many people who sit and eat actual lemons.

The sorbet was as soft, scoopable and somewhat creamy feeling as its compadre and and again felt more like a restaurant quality dessert than the frozen ice of supermarket brands. 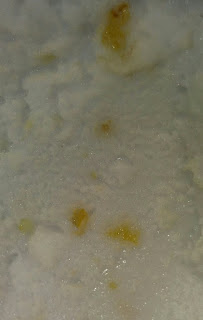 And there, my friends, are where the positives end.
I'm telling you, I've sucked lemons (post Tequila, naturally) that have less of a lemon flavour than this sorbet. It's ridiculously strong, tart to the point of actually being bitter, much more towards the sour end of the scale than sweet and isn't very pleasant at all. And that's just the sorbet! The small, hard pieces of lemon add no pleasurable texture - just yet more lemon flavour. OK, I thought, maybe it's just me? I'm not a great fan of lemon anyway and so I thought 4 would be a fair rating.

Sticking to my "waste not, want not" rule I tried to ride it out, halfway through though I'd had enough and declared it inedible, to which Mr.1T - self proclaimed lemon sorbet lover - replied "Thank God you said it first, it's disgusting". I don't always force him to clear his plate...Honestly!
We had a lovely posh meal before where a blend of a sort of Limoncello Sorbet was served as a palette cleanser, so we considered the Carte D'or could be used for that purpose. But afterwards I really think it's too strong even for that. A palette cleanser is supposed to be just that - a nice clean mouth, free of flavour and refreshed for the next course. Not a lingering lip puckering, bitter aftertaste on your tongue.

Rating:
Pretty awful to be honest. And we just emptied the bin and discovered it hasn't melted so who knows how they've achieved that consistency I was previously praising...
1/10