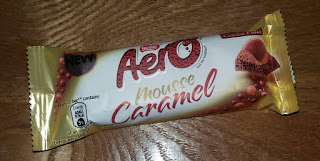 Last year Nestle released the Aero Mousse, I think I was alone in my enjoyment of it but I did say at the time a flavoured mousse would be nice - maybe mint, orange or hazelnut. Nestle have taken the safe route with caramel but I'm not complaining!

There is no visible difference between the plain Aero Mousse and the Caramel but the latter had a delicious caramel scent from the off. Both bars contain the same amount of mousse filling but unlike in the plain it's clear as day in the Caramel.
For someone like me, who enjoys eating my chocolate slowly, the bar is separated into easily snappable squares. 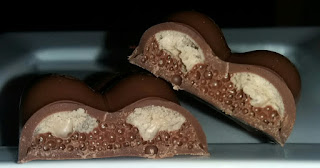 The fact I'd snapped it all apart affected the taste a little. I noticed the 2 squares on either end had less mousse inside, for some reason I ate these first (blame the OCD) and the unmistakable taste of Aero chocolate was nearly all I could taste. I could certainly feel the creamy mousse - the textures at play are lovely in this bar regardless of the flavours: the thick snap of the chocolate casing, the light and almost melting aerated chocolate inside and a thick creamier mousse, lovely!

The middle four squares had more mousse and the change in flavour was immediate. The Aero chocolate was more of an after taste and the caramel was stronger. It's very nice, quite sweet but it has a strong caramel flavour. It was actually a bit strange eating it without feeling the gooey stickiness of usual caramel!
I do think one litte change could make an improvement though, the whole time I was waiting for a saltiness that never came. I know, I normally moan everything is salted caramel flavour and I'm asking for it here! Maybe I've just got too used to it - Mr.1T looked at me like I was mad when I said it to him so that's a disagreement from him - I also just realised I wanted salt in yesterdays review too, maybe I'm deficient!