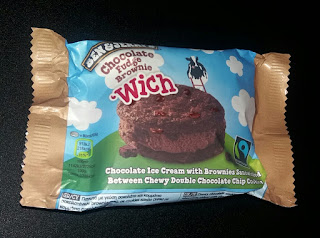 I bet you thought that was it for new ice cream from Ben & Jerry's? I know I did, but stuffed behind the Magnums in Tesco I found a whole shelf full of individual Chocolate Fudge Brownie ice cream sandwiches! I did notice a chocolate 'Wich on the press release Ben & Jerry's sent out but I hadn't seen or heard anything other than that darker looking 'Wich in the background of a photo. It makes sense though, in the UK especially, I know if you asked most of my friends and family to name 2 Ben & Jerry's flavours, they'd say Cookie Dough and Chocolate Fudge Brownie - they're the classics.

The wrapper is a bit busted, the Chocolate Fudge Brownie 'Wich is sold individually rather than in the boxes of 3 or 8 like the Cookie Dough, this is probably so it's put in the smaller ice cream cases but my local Tesco saw fit to dump as many as they could in the big freezers, hence why it isn't as pretty looking as its Cookie Dough bro. 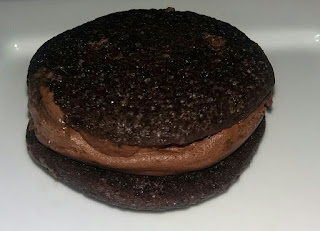 Its the same size as the larger Cookie Dough 'Wich and just as sturdy, if a little melted with a chocolate brownie scent rather than outright chocolate.
I stored it in the same freezer at home as the Cookie Dough 'Wich but the Chocolate Fudge Brownie was a lot softer to begin with and had a much faster melt, this could be due to the ice cream itself but it's much more likely my Tesco were up to their old tricks of leaving the frozen products sitting in the aisles for a few hours before actually shelving them.

Taking a bite the consistency was again the first thing I noticed, due to the fact it had already half melted it was a lot softer to eat - the Cookie Dough was soft too but still had a firmness to it whereas this felt a lot more like melted ice cream. Still I think I'm blaming Tesco for that.

Despite my first mouthful including the cookie and the ice cream the first thing I both felt and tasted were the large brownie chunks inside the ice cream. Full of flavour with a soft, chewy texture just like in the tubs and despite Tesco's best efforts no freezer burn whatsoever. But we all know Ben & Jerry's have good quality control!

The cookies were very different, for starters as you can see they're chocolate based. Initially I was a little disappointed (I never thought I'd say that in a B&J review!) as based on the colour I expected a strong cocoa flavour like a bourbon biscuit (or an Oreo if you must). Once I thought about it though, they aren't biscuits like a Bourbon or Oreo - they're a double chocolate chip cookie - the flavour was fine. Hopefully you understand what I mean when I say they're chocolate flavoured not cocoa, as strange as that sounds. It's a very nice chocolate flavour with chocolate chips scattered about, not too many but enough to provide smaller and stronger bursts of chocolate flavour - as if you didn't already have enough!
As I mentioned previously in this review and in the Cookie Dough, despite efforts otherwise, they had no sogginess or freezer burn but they are completely different in texture, softer than in the Cookie Dough 'Wich and most shop bought Cookies. If this was because of the way Tesco had stored them, then I can't thank Tesco enough and recommend you leave yours out for a while before freezing - they ended up with a consistency a lot more like a brownie than a cookie and as it fits in with the theme of the 'Wich, it was much more appropriate than a harder cookie.

Rating:
Another very tasty 'Wich from Ben & Jerrys, of the two I think the Cookie Dough has the edge just slightly as there is a greater contrast between ice cream, cookie dough chunks and actual cookies where in the Chocolate Fudge Brownie it's a little more blurred. That's by no means a criticism on the Chocolate Fudge - a big chocolatey, chewy gooey mess but that's just how I like it!
8/10